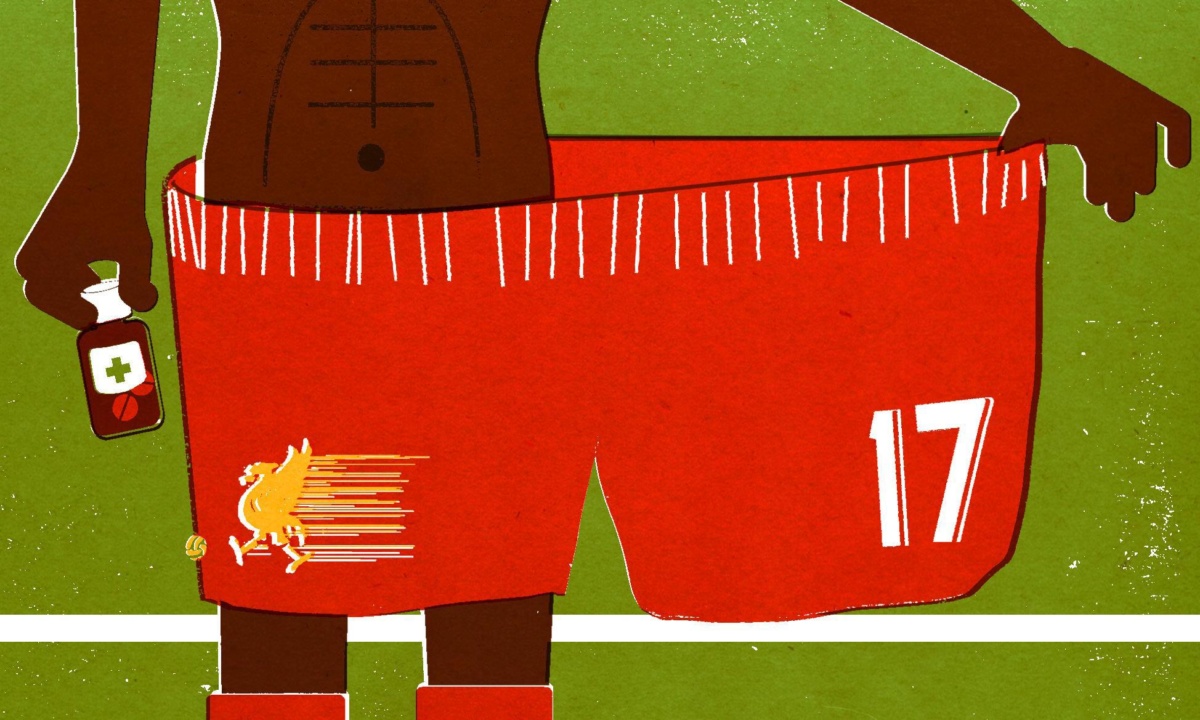 Mamadou Sakho is culpable and Liverpool are not but both have gained an unfair advantage, however minor. And whatever the timetabling issues, any club in this position should be stood down from the rivalry. Uefas rules are wrong

For all his current trials, there is a great deal to like about Mamadou Sakho. Before the news broke of the defenders failed narcotic test, followed this week by a 30-day Uefa suspension, I had a vague plan to write a kind of fond, fuzzy hagiography a Sakhiography, if you will about what a brilliantly engaging footballer he has been to watch this season.

In Brazil they like to talk about players who go out and wear the shirt. Sakho doesnt only wear the Liverpool shirt. He looks like he wants to eat it, floss his teeth with it and sneeze it out of his nose in great dripping red nylon strings.

Sakho! What a sight! From the slightly frenzied pre-match prayer, to his excellent close defending, to the route he propels himself about the pitching via a series of powerful cramps and jerks. The odd howler aside, Sakho isnt precisely clumsy. Its more he seems to operate from behind a fug of trapped energy, a majestically loopy jumble of extremities, surging out from the back like a drunken Franco Baresi.

Above all he plainly just loves playing, a rowdy child from a Parisian banlieue who gives the impression of having detected a genuine home in Jrgen Klopps soulful, evolving Liverpool. If you needed any more persuading he allegedly slapped a football journalist once in France( he did say sorry ).

An engaging player, then. None of which changes the fact the best parts of Sakhos season are now unavoidably tarnished following his failed exam and apparent adoption of remorse. And, more importantly , none of this changes the fact Liverpool truly shouldnt still be playing in the Europa League.

It may seem harsh. Sakho is culpable. The club is not. But both have gained an unjust advantage, however minor. And both “shouldve been” stood down from the rivalry, whatever the shemozzle of timetabling, as should any other club in the same stance. The regulations say otherwise. The rules are wrong.

Instead we have a bizarre world of fudge and compromise. Sakho tested positive for a banned substance, apparently a weight loss narcotic, after the Europa League last-1 6 second leg against Manchester United. He played 90 minutes that night, attaining 18 drugassisted clearances and tackles, and playing a key drug-assisted role in a landmark outcome for his club.

He has played six more club games since, including scoring a crucial late drug-assisted equaliser against Borussia Dortmund. At the end of which Liverpool who have acted commendably throughout all this still have a decent opportunity of drugassisted silverware, and beyond that a drugassisted place in next seasons Champions League.

There has been plenty of compassion for Sakho personally. The suggestion is he took a fat-burning substance. A mistake but barely sinister. He does not is in favour of vilified. On the other hand, the debate that this is just a fat burner is both factually and morally flaky.

On a sport front, Sakho was previously fell at Paris SaintGermain after gaining weight. Clearly the coach-and-fours at the club thought it was a problem. Indeed only someone who had never watched any modern football could conclude that peak athleticism, the ability to run nonstop without any loss of velocity or focus, isnt a massive part of video games. Being irreproachably fit is a skill in itself. The words of the former Australia wicketkeeper Ian Healy spring to mind after Sri Lankas portly, feisty captain Arjuna Ranatunga had asked for a athlete. You dont get a athlete for being an overweight, unfit, fat cunt, was Healys rather unkind answer. Buried within which is a grain of pure sporting truth.

More to the point there is no grey area here , no sliding scale of good and bad doping. A list of banned substances exists to take this distinction away. This is about the purity of competition. Its a matter of principle. Remember that?

Uefas rules are at least clear. One player tests positive: player gets penalise. Two players test positive: same thing. Any more than two and only then could the club face sanctions. Or in other words, in football its fine if 20% of your outfield players are on medications. No problem. You still get to win. Imagine this in other athletics. Its like Ben Johnson being allowed to keep his gold medal in 1988. Ban him. But we cant change what happened.

The objection to this comparison is that Sakho is only one member of a squad. Why punish all for the minor wrongdoing of one? It is a startling piece of logic that can only spring from a desire to soft-pedal and downplay. As the World Anti-Doping Agency itself has suggested there are hours the more than two regulation simply isnt strict enough. In athletics, the entire British 4x100m relay squad lost their 2002 European gold medal because of Dwain Chambers. Harsh on the other runners but fair to the sport.

Plus, just imagine the change of internal cultures should the burden of keeping your players clean fall on the clubs, as it does with every other major sort of discipline. Field an ineligible player and the match result is instantaneously overruled. And yet there is no actually significant club penalty for winning a game while one, or indeed two of your players are wired on purple hearts, Jgerbombs and nandrolone? Carry on!

The answer, of course, is that no one wants to linger on any of this. What is the motivation for maxing out the penalty? Nobody actually wants to kick this particular barrel of serpents over. And so football continues in a state of eerie prelapsarian soothe. Sakho will return , no doubt a little wiser. The Europa League will be written up without an asterisk or a footnote. And meanwhile the reveal rolls on, the background music turned up a little higher.