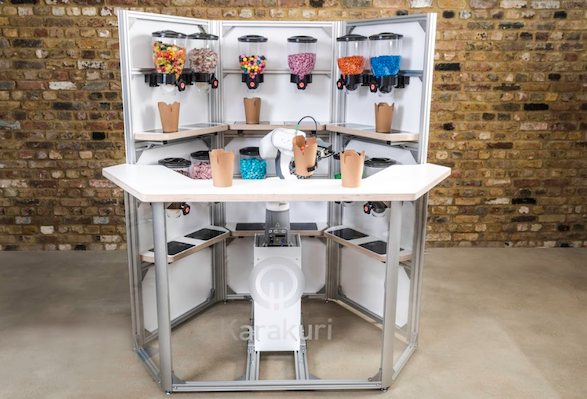 The constant refrain in the tech world is that the world is about to be rocked by the combination of AI and robots. Therefore you’d think that startups that build either AI or robots would be onto a winner. However, there’s a serious misunderstanding going on.

What is becoming clear is that the closer companies are to actual robotics, the only way to compete will be in genuinely transformational hardware. The epoch where a robotic arm was considered innovative is long over.

Similarly, robotics as a sector won’t go anywhere without being married to powerful machine learning and visual systems.

Thus it is that startups that can do both AI and mixture this with robotics, which might be either off the shelf robotic limbs or tools, will position themselves far higher up the valuation stack.

So it’s significant that U.K.-based startup Karakuri has ” opened the kimono” on its plans to do merely that.

Karakuri utilizes a combination of robotics, machine learning, optics and sensors to deliver a robot that are able to build personalized, freshly prepared, high-quality dinners. The advantage is that the robot can stimulate something that matches exactly what the customer wants( no nuts and seed for instance, only this amount of dressing, etc .) and the result can also minimize food waste.

The startup comes at the right time. Research shows that almost two-thirds of consumers globally now follow a diet that restriction or prohibits the intake of some foods or ingredients due to food intolerance, as well as following a specific weight loss diet.

Karakuri has now created a PS7 million seed investment, led by Ocado. The fundraise includes investments from Hoxton Ventures, firstminute Capital and Taylor Friend, and will be used to further develop the company’s technology, strengthen its IP base and expand its team for global growth.

For Ocado, the investment means it can expand its value proposition in grocery, especially through Ocado Zoom, its new delivery arm.

Karakuri CEO and co-founder, Barney Wragg, says,” Consumer feeing habits in and out of the home are changing rapidly as demand increases for healthier options that match specific dietary requirements. This growth in menu personalization is putting huge pressure on restaurants, cafes and other food retailers. These providers have historically relied on identically mass-produced dinners to maintain their profit margins. By using robotics and machine learning, Karakuri’s systems provide localised micro-manufacturing within an existing restaurant, retail or commercial kitchen. Our systems prepare personalized dinners onsite in real time to the exact requirements of each customer.”

Brent Hoberman, Karakuri’s founding chairman, co-founder of Founders Factory and general partner at firstminute Capital, says:” The hour is now for robotics and AI to drive change in the restaurant and food services business. Barney and Simon have assembled a world-class team to go after one of the next large markets to be enhanced by this technology. We are delighted that Ocado, a global leader in robotics and distribution, has chosen to invest in Karakuri to lead the innovation in this sector.”

Hoberman says startups like Karakuri are going to become more significant as we reach the tipping phase where manual workers are becoming less and less available to do the kinds of work that used to be done in restaurants.

Karakuri emerged out of the Founders Factory incubator, but the backstory to this startup is significant. Its advisory board includes industry experts from ARM, Ocado, Imperial College, Bristol Robotics Lab and Edinburgh Centre for Robotic.

Bristol Robotics Lab, in particular, has generated a world-class reputation for its robotics accelerator.