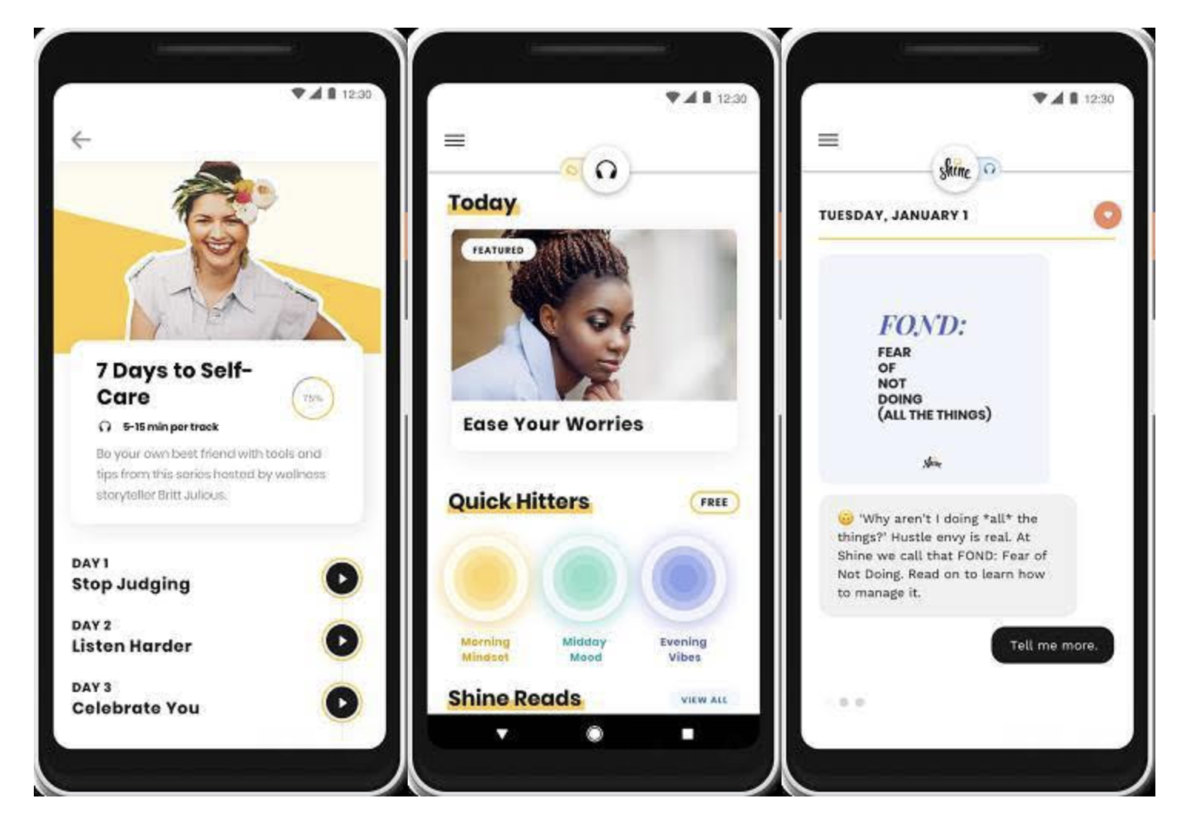 Shine, one of the many apps capitalizing on the growing self-care trend, has now brought to Android devices its app used by 3 million people. Originally launched as a simple messaging bot that doled out life advice and motivation, Shine has grown over the years to become a larger self-help platform aimed largely at the millennial crowd — and, in particular, millennial women.

As of Shine’s $ 5 million Series A round last April, the app’s user base was 70 percent female, and 88 percent were under the age of 35.

Since then, it has added another million to its then 2 million users. That growth came despite Shine having missed the mark at times, as with its failed life-coaching subscription product that never emerged from testing.

Today, Shine’s focus is on personal growth, motivational messaging and other self-improvement topics, which are delivered by way of text and audio. Through short-form audio, users can get help across a number of areas, including things like productivity, mindfulness, focus, stress and nervousnes, burn out, adoption, self-care for online dating, creativity, forgiveness, work frustrations and more.

The app also sends daily motivational texts based on research-backed materials that help users better understand the topic at hand. These are published in a more casual style — almost like it’s a friend chatting with you.

Shine now monetizes through a Premium subscription that offers expanded access to Shine’s audio talks and challenges, as well as additional features like offline listening and the ability to save favorite texts. This is either $4.50/ month if you pay the $ 53.99 annual fee at once, or $9.99 per month. That’s roughly in line with what some meditation apps charge — for instance, the top meditation app Calm is $59.99 per year. And it’s cheaper than Headspace, which is $ 95.88 annually, by comparison.

Shine had said last year that one of its plans for its Series A was to build out the Android experience, as nearly half its customers were accessing Shine on Android devices. In those cases they were utilize the texting service due to the lack of an official app.

On iOS, Shine is fairly popular in its category. It has jumped to become the No. 16″ Health& Fitness” app in the U.S. following the Christmas holiday — a time of year when people get serious about wellness and self-care. However, it’s only the No. 86 app on the” Health& Fitness” Top Grossing chart, which sets it far behind other wellness apps, including meditation apps like Calm, weight loss apps like Lose It! and workout apps like the No. 1 app, Sweat from Kayla Itsines.

Given the app stores’ larger transformation to subscriptions over paid downloads in recent years, it will be interesting to see how many apps the average consumer will actually pay for through the subscription model — and to what magnitude more niche apps like Shine will be sustainable in the long term, as a result.