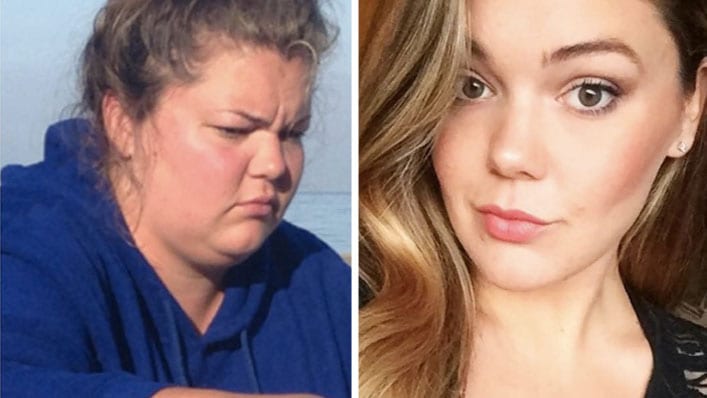 It’s crazy how life can go from “normal” or even happy to a living hell in a matter of moments. Justine McCabe was forced to endure one of those moments that changed her life forever.

Shortly after losing her mother, her husband took his life following a long battle with depression. Though Justine’s mom died from chemotherapy complications caused by her obesity, she couldn’t help but eat her feelings. Losing two of the people she loved the most within only a two-year time span was simply unbearable.

The catastrophes sent Justine into a downward spiraling of depression, and she spent three months barely attaining it through the days.

Finally, her family came up with a plan to help her get going: exercise.

They were hoping that working out would not only give her a sense of accomplishment in the day but also an opportunity to chase objectives and work on her weight. However, everyone seemed to have doubts that she actually had the will power to stimulate the changes necessary.

It was all she could do to get out of bed, much less actually hit the gym.

“I didn’t like what I assured, ” Justine told TODAY. “I feel like I appear so broken and lost and sad and that’s the reason why I started taking a picture a day. I wanted to see myself alter, see if my expres would change.”

And it surely did.

She came up with the idea to document her journey and took a picture of herself every day for a year; day one she was 313 pounds.

After losing her mom and spouse, she totally stopped taking care of herself, but her journey was just beginning.

This Really Isn’t About Weight Loss At All

“I was the unhappiest I had ever been, ” wrote Justine on Instagram. “I had a very bad debilitating back injury, I wasn’t coping well with the death of my mother or the daily emphasizes of my life. One thing I did know how to do, stuff myself full of food so I felt comforted. That is no way to live. Looking at’ before’ pics I often feel sad for’ her.’ I truly feel like a different person. I am always quick to tell everyone that even though I have lost a massive amount of weight…this isn’t really about weight loss at all…it’s more of a journey to rediscover myself.”

“My husband’s death was a really heavy and horrible day. It was worsened because my mum had died not long before, too, ” says Justine. “Having a loved one commit suicide and being in the aftermath of that is one of the most fearful, nasty things you can go through.”

“The 365 days of selfies was one of the first things I did; it started during my mourn period–the first one was horrible, I seemed so lost and broken.”

But a year and 124 pounds later, people can hardly recognize the woman she once was.

“I stimulated the choice. I have to do something different, ” says Justine .

Though her ache operated deep, she refused to wallow in her self-pity and watch her 9- and 12 -year-old boys suffer for it. She needed to be strong for them too.

And now, they can ALL fit inside mommy’s old jeans!

Justine knows her body is far from perfect, but she’s received a new inner strength in her fight for freedom that has allowed her to embrace her flaws with grace.

The mother of two used to resort to unhealthy foods to help cope with her dreads. Now, she not only fees healthy but has decided to conquer her fear of heights by skydiving and cliff jumping!

“I knew if I could survive living without my husband and mum, then I should push my borders and limits to face all fears I had, to live “peoples lives” they would be proud of.”

No valley is too low that it can’t be scaled with the right mindset!